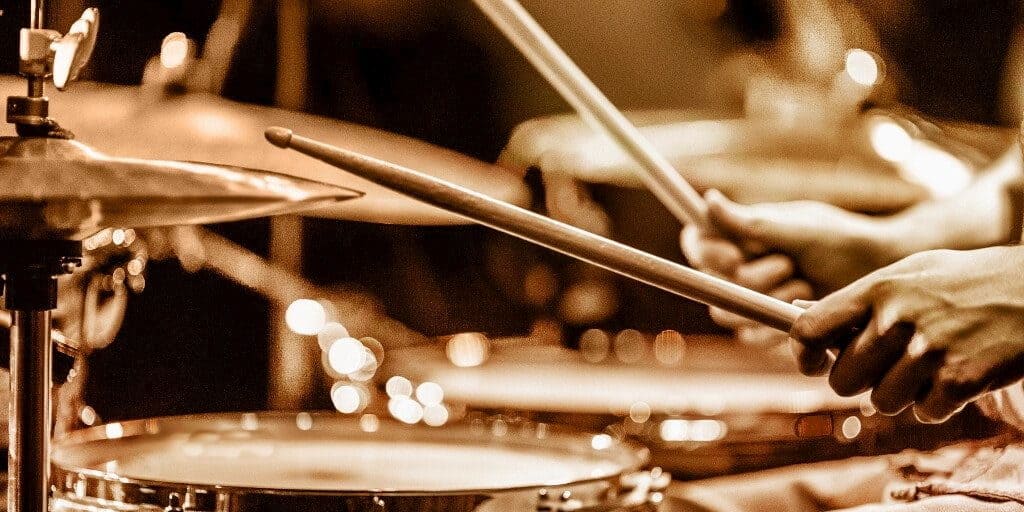 Can I learn to play the drums at age 40?

There’s an idea in popular culture that stops more people engaging with music than any other.

As a drum teacher and professional drummer, I know that taking up a new instrument can be very nerve-racking, especially later in life.

We’re conditioned to think that only talented children can ever really excel on an instrument, or we worry that our brains can no longer learn as they once did.

Yet, both the science, and my own personal experience, demonstrate to me that not only CAN adults learn to play the drums, they absolutely SHOULD learn to play!

Fortunately, the barriers that prevent adults from learning drums are largely imagined.

For many years, it was widely believed in the scientific community that adult brains were largely set in their ways.

It was believed that there was a ‘golden’ period of time as a child in which you could rewire your brain to learn new skills, but that this rewiring was no longer effective as you reached adulthood.

Fortunately for anyone that wants to learn the drums, this idea is now considered outdated.

Adult brains ARE able to rewire themselves to learn brand-new skills to a high-level thanks to the magic of neuroplasticity.

Put simply, neuroplasticity is the ability for the brain to change itself.

It’s now considered fact that adult brains have a vastly greater ability to adapt and learn than we previously believed to be possible.

We can throw away the old myth that an adult can’t learn an instrument, and follow our curiosity to learn to play the drums without the fear that we will never progress.

As a teacher, I truly believe that the biggest factor holding potential adult students back from learning the instrument is their own judgement of their abilities.

As a child, you tend to be curious without being judgemental. You aren’t too worried about making mistakes, and play music simply for the joy of doing it.

Adults tend to be far less patient with themselves, and overly criticise their own abilities.

The best advice I can give to an adult beginner is to enjoy the process, and to not worry about the results.

I try and cultivate a 50% practice and 50% play mindset with my students. Half the time, our practice is more skill-based (for example, learning new drum techniques or working on timing).

The other half of the time, we let loose and have fun, whether that’s playing along to songs, improvising or creating new musical ideas.

What if I’m not fit enough to learn the drums?

As an activity, playing the drums is more strenuous than say, knitting, but as drummers, we are actually taught to conserve energy rather than waste it.

Good technique actually allows us to use far less effort while playing than the audience might suspect.

Physical fitness only really becomes a factor if you’re playing for very long periods of time (for example, as a touring drummer).

This is because a good drummer is able to use the natural bounce of the drum to his or her advantage.

When we strike a drum, there is a natural rebound of the stick (in physics, this is described as an equal and opposite reaction).

By using this rebound, we don’t actually have to move our hands very much when playing.

Session drummers who play night after night are masters at putting in the minimum amount of effort required to create a fantastic drum sound.

If you do feel yourself getting very tired with drumming, it’s often a technical issue, and doesn’t mean that you aren’t fit enough to play.

Be patient with yourself in the beginning. It will take time to improve your technique but as you get better and better, playing becomes easier and easier.

If Charlie Watts of the Rolling Stones can still hold down the beat at age 78, then learning the drums at 40 should be no trouble at all!

If you’re worried about getting pain in your joints when playing the drums, this can usually be prevented with good technique.

When we play with good technique, we move in a very relaxed way, in line with the natural motions of our hands.

Drummers who hurt their hands tend to play with a very tight grip, meaning they absorb a lot of the forces created when they strike each drum.

You can actually generate a lot of power and volume (for example, if you want to play in a rock band) without putting excessive force through your hands.

As a result, many great drummers never retire!

Why you should learn to play the drums at age 40

There are endless benefits to learning to play the drums at 40 (or any age for that matter), but here are a few of my favourites:

Joining a band is an amazing social opportunity to be around like-minded people.

There’s something about playing music with others that creates a stronger connection between you and them.

The shared experience of going to gigs, rehearsing, and creating drum sheet music together can form a bond that lasts many years into the future.

As explained in the short video below, playing music is like a workout for the whole brain.

Numerous studies show improvement in cognitive function as a result of learning to play music.

Excitingly, this means that as your musical ability improves, there are knock-on effects that improve many other valuable functions in the brain.

You have complete freedom of choice in how you play and what you want to express.

Music has this incredible ability to make you feel more connected to yourself, in turn making you more passionate and enthusiastic about life.

When it comes down to it, drumming is just great fun. What’s more, the better you get, the more fun it becomes.

There’s nothing better than sitting down on the drum set and rocking out to your favourite tunes. Regular practice of drumming can make every day more enjoyable and fulfilling.

Think of creativity as a muscle rather than a talent.

When I practise more, I have more ideas, for new drum beats, solos and ways that I can improve my drumming.

Musical ideas don’t come out of a vacuum. As you expose yourself to more and more ideas in your practice, creating new ones will become easier.

One of the key secrets of any creative pursuit is that you don’t need to sit around waiting for inspiration to strike.

There are methods that you can use to stimulate your creativity, even if you have never practised this skill before.

The famous drum teacher Mike Johnston explains one such method in the video below, which provides a simple recipe for exploring creative ideas on the drums.

The key skills of drumming CAN be learnt and developed with the right practice.

I recall one conversation I had with a world-renowned session drummer who was keen to remind me that timing is a skill to be learned and improved upon.

We all have differing levels of ability when we start something, but I’ve seen time and time again that the musicians who succeed are the ones who consistently put in the work.

Drummers continue to improve as they get older

There’s no ‘peak age’ after which you lose the ability to become a great drummer.

While there’s no need to become a ‘great’ drummer (enjoying your playing is, in my opinion, the most important reason to take up the drums), it’s nice to know that you aren’t limited in your potential.

Nearly all of the drummers that I consider to be at the cutting-edge of playing are over 40.

These are drummers who are performing at the very highest level, night after night.

The following drummers are still considered to be at the top of their game and all made it onto Rolling Stone’s 100 Greatest Drummers of All Time List:

These are just a few of my favourite examples, from the drummers that inspire me most.

There are a huge number of examples from the Rolling Stone list and from the wider community of drummers who are continuing to improve their performance year after year.

My teachers are in their 50s and have full-time professional careers in the industry.

If you needed any more convincing that your drumming can go further than you ever expected, there’s no better example than Buddy Rich.

Towards the end of his life, he was delivering drumming performances that no other human could match.

He was delivering playing of such astonishing speed, virtuosity and precision that many drummers still regard him as the greatest drummer who ever lived.

In 1978, he made a TV appearance showing off his skills to the world, which you can check out below.

As he plays faster and faster, he relies on his exceptional technique more and more.

Instead of moving more to play faster, he actually moves less.

When he decides to use bigger movements, it’s just for show and the performance.

He actually chooses to use more energy to put on a show for the crowd, but it’s his superior technique that gets him through what is likely to be one of the most difficult drum solos ever recorded.

Incredibly, he was 60 when this was filmed. And he does it in a three-piece suit.

So is age really a factor in learning drums?

In conclusion, your age is a very small factor and largely insignificant in learning to play the drums.

Yet they are all on the same path of learning, improving and reaching new levels of musicality and enjoyment with their playing.

It’s your curiosity for learning that really defines your ability to play the drums, not whether you’ve reached your 40th birthday.

What do I need to learn to play the drums?

Getting started on the drums is really straightforward.

You’ll have to learn basic drum technique and some key drum beats, but it really is easier to start drumming than you think.

If you want to find out more about what drumming is all about, I’d love to help you.

I’ve created a fun and easy-going online video course – designed specifically for new drummers like yourself.

I know it can be pretty confusing and overwhelming to get started with learning to play a musical instrument and I wanted to make getting started as simple and enjoyable as possible.

You can find out more information about my beginners’ drum course by clicking here!

The majority of the lessons can be followed with no equipment whatsoever, meaning you can jump right in and see if drums is right for you.

I really hope that you decide to give drums a go. Age 40 is absolutely no barrier to playing the drums; your playing will likely continue many decades into the future.

Most importantly, don’t forget to have fun and welcome to the community!