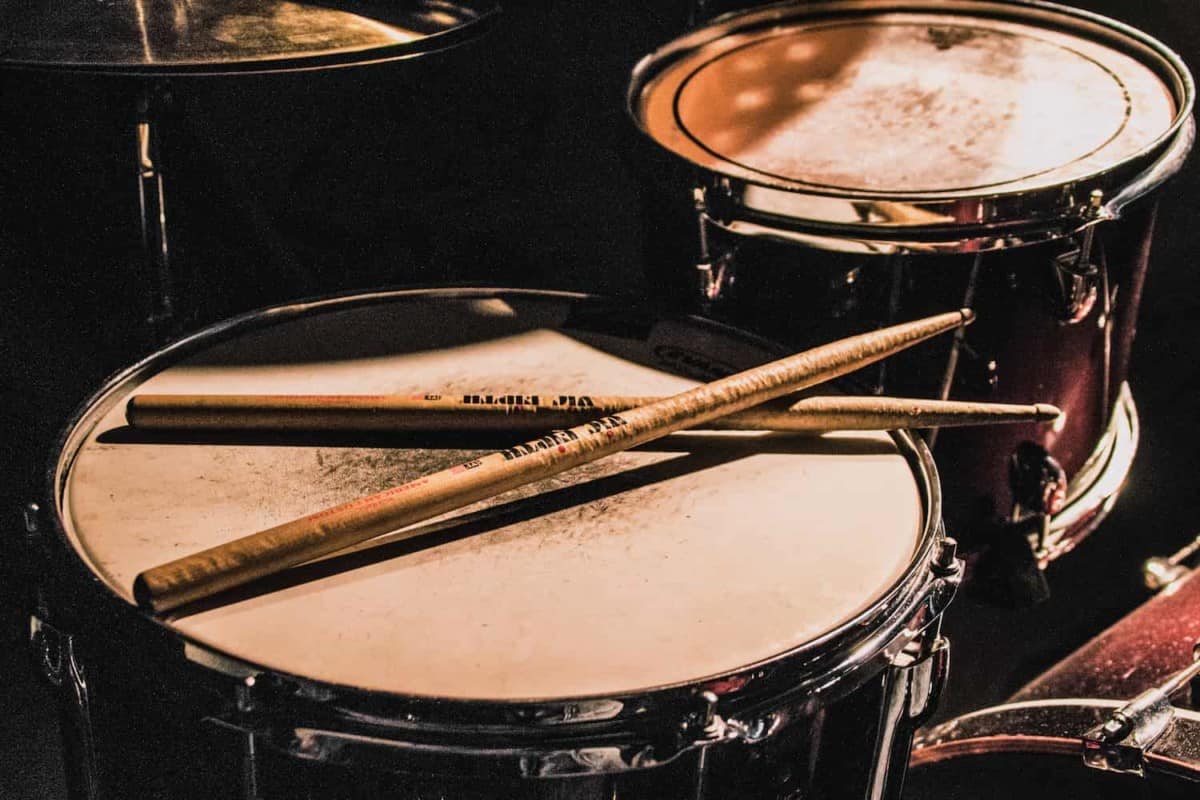 If you’re reading this article, you probably know by now that not all drumsticks are made for the same purposes. Drumstick sizes differ depending on what kind of playing you enjoy.

If you’re a heavy hitting metal drummer, you’re going to need a different stick than the lighter and silkier touch of a jazz drummer.

This article breaks down all the confusing terminology, letters and numbers to help you pick the perfect stick for you – whatever your requirements.

As well as creating a drumstick sizes chart for you so that you can compare different options, I’ve also made suggestions from my own experience as a professional drummer.

If all the possibilities out there seem overwhelming, don’t worry. I’ve highlighted the most popular choices – so if you feel stuck, start with one of my top suggestions and go from there!

We’ll also look at some of the more unique drumstick sizes and models out there, so if you want to get something really unique and personal, you can.

How To Understand Drumstick Sizes

Drum companies have a letters and numbers system for explaining what kind of stick you are actually buying.

The general rules are pretty straightforward and easy to follow, so we’ll start there.

They give each type of drumstick stick a letter and a number – for example 5A or 2B.

The letter and the number are the most important bits of information in understanding whether that particular stick will be right for you.

Let’s start with what the letter means.

What does the letter tell you about the size of the drumstick?

You’ll typically see one of four possible letters on a drumstick – A, B, S or D.

A and B are by far the most common, whereas S and D are a bit more traditional.

A (orchestra) is the lightest type of stick out there. This was the type of drumstick used in an orchestra, but nowadays is used in a wide range of musical styles.

B (band) is a medium weight stick – this kind of drumstick was used in concert bands. In more modern music, they make a great choice for rock drummers and people who are playing with a louder band.

S (street) is a heavyweight stick – in a more traditional setting you’d use this stick in a marching band. It’s not as common to see this kind of stick out and about these days.

D (dance) is also nowadays a bit of an oddity, but was traditionally used in dance bands. The 8D, which is the most popular stick of this kind, is a light and long stick.

What does the number tell you about the size of the drumstick?

So we’ve taken a look at the letters, and you’ll probably end up choosing either an A stick or a B stick.

Now let’s choose a number for your stick.

The smaller the number, the thicker the stick.

The larger the number, the thinner the stick.

The most common numbers you’ll see on a stick are 2, 3, 5 and 7 – though there are also other possibilities out there.

You’ll be able to find out more about each specific size in our drumstick sizes chart below.

5 is considered the standard choice in the drumming world – so it’s a great place to start.

One strange exception to the numbering system is that a number 1 stick is longer, not thicker.

As you’ll see, drumstick manufacturers started improvising with the system a while back, so it can get pretty confusing! Don’t worry – just keep the general rules in mind.

If you remember one sentence from this article, this is it…

Classic drumstick sizes and what they are used for

Following on from what we’ve learned above, let’s have a look at some of the most popular drumstick sizes out there.

What are the most common drumstick sizes?

The most popular choices, explained

A 5A would be the standard choice for a new drummer who isn’t sure where to begin. This is the classic stick choice – so if you just want to get started – this is your best option.

CLICK TO see our recommended 5A DRUMSTICK ON AMAZON

You can also use my drumstick sizes chart below to choose something more personalised.

A 5B is like a 5A, but with more power and weight. If you want to play in a louder setting with a rock band, this will likely be your best bet.

If you are an aspiring rock drummer – don’t forget to have a look at our best drumsticks for rock article too.

5Bs pack a punch, but aren’t crazy heavy, so they won’t slow you down too much.

A 7A, is a thinner, quieter stick. This would be perfect for jazz or quieter styles – when needing to play a bit more gently or move very fast around the kit.

For me, the 7As are more enjoyable to play with when I don’t need to make a huge amount of noise.

If you chose a 2B drumstick, that would be a much thicker stick.

If you’re buying a 2, you’re looking to deliver some serious power drumming – the kind you’d find in heavy rock, metal, and anything else that needs you to whack your drums with everything you’ve got.

If this sounds like your kind of thing – we also recommend you take a look at our most durable drumsticks article.

With all of these letters and numbers, do keep in mind that different manufacturers will have slightly different sizes of stick.

And because the sizing system has been around since the 20th century, the drumstick makers have started to improvise slightly. So if you ever see inconsistencies in the system, don’t worry.

If you want to know EXACTLY how big a drumstick is, you can find out. The manufacturers will tell you the exact length and diameter of each type of stick on their websites.

This means that you can compare two different brands, even if the numbering system that each company uses is slightly different.

If you’re ready to get started, click here to scroll down to our drumstick sizes chart. If you want to know more about how to find the best stick for you, check out the next section, which will cover some of the other drumstick options that are out there.

Now we’ve looked at the basics, let’s look at the weird and wacky world of all the other ways you can mess with a drumstick!

1) If you see a drumstick labelled as extreme or ‘X’ – these drumsticks are normally longer. This gives you slightly more reach around the drums, and also an increase in power. So if you bought an Extreme 5A drumstick – this would be like a normal 5A stick, only slightly longer.

These longer sticks also have a slightly different feel to them, in terms of their balance and responsiveness.

My advice would be to try a pair of longer sticks out at some point on your drumming journey and see if you like them more.

2) Manufacturers will sometimes put two different numbers on the stick – for example 85. This would be a stick that is somewhere in-between an 8 stick and a 5 stick.

Many drummers want a blend of two different stick sizes, so these can be a great choice if you can’t choose between the two!

3) If you see the same number repeated twice e.g. 55A – this normally means that it’s the same as a normal stick of the same number (in this case 5A), but with something extra added, normally slightly more thickness or length.

For example, the Vic Firth 55A is a 5A stick, but with a bit more thickness.

4) It’s also worth being aware that drumsticks are made of different woods – and this can affect the heaviness and therefore power of the stick.

If you have the option, go for hickory, as this is the standard choice.

5) There are two other factors that affect drumstick performance, the tip shape and the taper length.

If this is a little overwhelming right now, don’t worry. Focus on the size first – choosing the tip shape and taper length is a bit more technical and requires a bit more experience.

Just as a brief overview – tip shape affects the tone that you produce on the drum (warmer or brighter).

Most sticks use a teardrop or oval tip shape, which produces a warm, dark sound.

However, if you wanted your drumming to stand out more and be more obvious when playing with a band, you might choose to go with a brighter sound.

A brighter sound would be produced by a smaller tip shape, such as the ball or barrel tip shape.

The other point to consider is the length of the taper, which is the part of the stick that connects the tip to the main body of the stick.

6) You can also get your drumsticks with a number of different finishes, coatings and grips – depending on the feeling you prefer in your hand.

Check out the following video which takes you through the main options available when purchasing a Vic Firth stick (the most famous drumstick brand).

Okay! So now you understand how to interpret all the various numbers, letters, hieroglyphs, squiggles and everything else you’ll find on a drumstick, let’s put it all together in a chart where you can make a decision about the kind of stick that would be right for you.

To make the comparison easy for you – we’ve used the sizes given by the world’s leading drumstick manufacturer, Vic Firth. In rare cases where Vic Firth does not make a stick, we’ve labelled it below with the size from drumstick maker Vater.

If you’re buying any drumstick, a Vic Firth stick is the standard choice. We’ll provide a link to where you can find Vic Firth sticks through Amazon.

If you’re searching for a particular stick size on Amazon, simply type ‘Vic Firth’ and the size you want into the search bar using the link below.

So there you have it! Thanks for taking the time to find the right drumstick size for your playing.

Don’t worry about ‘getting it right’ – you won’t find the perfect stick right away, and it takes some experimentation with trying different sticks to discover what you prefer.

Over time, as you try more and more sticks, you’ll develop a more intuitive understanding of which ones feel the best to you – and you’ll start to become more aware of what you personally prefer.

At the end of the day, you should always just play with the size of stick you feel most comfortable with.

Whichever stick feels right for you is the best stick – it doesn’t matter what other people are using! If you ever need more power or speed, you can always change it up later.

To paraphrase a famous drumstick advert: ‘The only thing that should come between you and your drums is your favourite stick!’

Learn a new drum beat every day for 10 dayS

Sign up to our free newsletter ‘The Beat Breakdown’ and learn a beat every day for 10 days. Perfect for any drummer in lockdown.

👋 Learn popular songs on the drums in hours, (not weeks!)

Finally, a simple and enjoyable online drumming course that helps beginner adults get started and playing songs in hours, not .

I WANT TO LEARN MORE