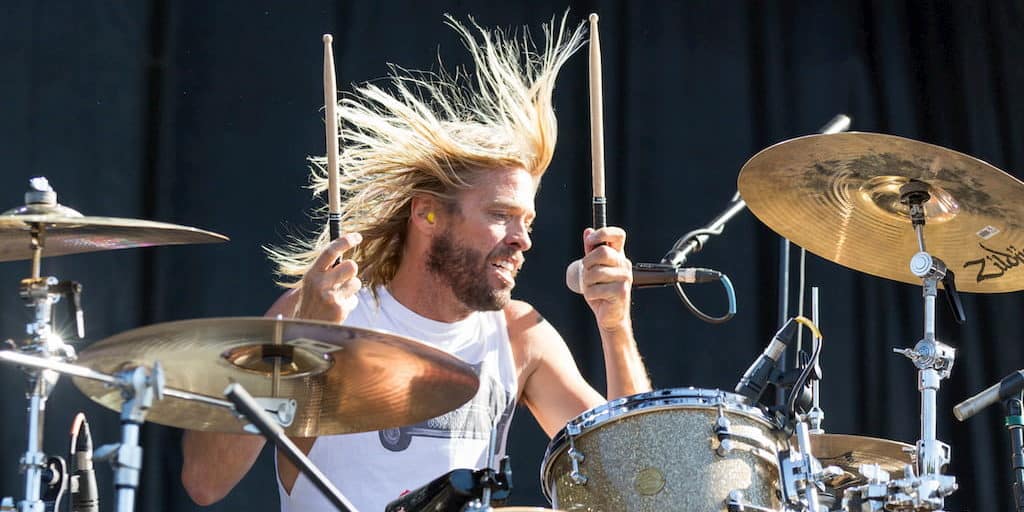 If you’re inspired by bands like the Foo Fighters, Led Zeppelin, the Red Hot Chili Peppers, AC/DC and The Who, you’re in the right place.

Every great rock drummer needs a great pair of drumsticks.

They have to be powerful enough to create a solid rock sound, strong enough to withstand heavy playing and versatile enough to move around the drum set easily.

In my many years of playing, I’ve discovered that any old rock drumstick simply won’t do.

Choosing the right brand and type of drumstick has a huge impact on your sound.

In this article, I hope to help you understand the differences between the various drumsticks that are available to you and help you to make a great choice for your own playing.

Buying a great pair of sticks is one of the best things you can do to make your drumming even more enjoyable, both for you as a player and for the people that hear your music.

For those about to rock, we salute you!

Below are my top 5 picks for the best rock drumsticks, but first, read on to learn how to pick the best sticks for you.

What are the best rock drumsticks?

My top tips for buying a rock drumstick

Before we dig into the sticks that I personally believe to be the best out there, I’d recommend you have a quick read of this section to help you choose a stick that’s right for you.

For a rock drumstick, there are a few important things to think about when making your decision.

If you’re one of those guys or gals who like to play really hard and loud, you’ll probably find yourself breaking more than your fair share of drumsticks.

If this sounds like a familiar problem, don’t worry. Many of the great rock drummers throughout history were exceptionally heavy hitters.

The solution to this is to get sticks made of denser material or choose a larger stick size. 5Bs tend to work pretty well for most rock drummers because of their increased thickness.

Alternatively, you can get a smaller stick size like a 5A, but choose a stick made of oak (which is denser).

This should solve the problem of breaking sticks all the time for the vast majority of drummers, but if you’re still having trouble, you might want to check out my most durable drumsticks article.

If you don’t have an issue with breaking sticks, then you could use something like the American Classic Extreme 5A, which delivers power while also being a bit lighter.

If you want to go really in-depth into the different drumstick types and how they all relate to one another, you can check out our guide here.

There’s a lot of craftsmanship that goes into making a great rock drumstick.

Wood is naturally an uneven material, so just chopping a log into sticks and hoping for the best isn’t going to provide a good result.

For example, did you know that Vic Firth sticks are pitch paired? This means that each stick in a pair produces the same sound, as they both resonate at the same pitch.

Without innovations like this, your drumming can sound uneven and lopsided, even when your playing technique is good.

Don’t be tempted by the cheap stick bundles out there. They sound worse and break more easily, meaning that they could actually cost you more in the long run.

Be sure that all the sticks I’ve chosen in this article produce a great sound.

But you don’t have to take my word for it, as many of them have been endorsed by world-famous artists from some of the greatest rock bands ever.

You don’t need to learn lots about the science behind drumsticks to make a great choice.

I’ve chosen some of the best artist-endorsed sticks available in this article, chosen by world-famous drummers.

It’s much easier to sound like your drumming heroes when you have access to the same equipment that they do.

Rather than worrying if you’ve got a great stick, you can trust in the judgement of a world-class drummer with a stick that they use on a day-to-day basis.

One final piece of advice on getting a great stick

Don’t be afraid to experiment with different sticks and see which suit you best.

I don’t want you to waste any time with terrible drumsticks, but it’s definitely okay to try out a few real high-quality ones.

The fun of drumming is exploring all the things that are possible on your instrument and drumsticks are just another awesome part of that creative journey.

The American Classic by Vic Firth is probably the most highly praised drumstick in the world.

And the American Classic 5B is the ideal variety for most rock drummers.

It’s heavy enough to pack a great punch when you play, but isn’t restrictive like some extremely heavy drumsticks.

This means you can still executive difficult drum fills and fast songs, but don’t have to worry about sounding half-hearted or struggling to be heard with a band.

If you’re feeling confused by the huge variety of rock drumsticks out there, my advice would be to go for this one.

For many drummers (including the professionals) this drumstick is an essential part of their gigging equipment. It’s also very affordable, especially considering its quality.

Here’s a quick rundown of what’s great about the American Classic 5B:

It’s hard to think of many rock drummers that are more inspiring to me than Chad Smith.

His ability to produce such an exceptional sound for the Red Hot Chili Peppers when playing simple grooves has led to countless drummers studying his style, including myself.

While the Red Hot Chili Peppers could perhaps be described best as ‘funk-rock’, these sticks are powerful enough for any style of rock drumming.

They are actually thicker than a standard 5B, meaning that they produce even more power for laying down a rock-solid drum beat.

Chad has been using these sticks for over 25 years and it’s easy to see why.

The specially designed taper and tip are ideal for creating the intensity required for Chili Pepper music and other heavy rock playing.

For some inspiration, check out this video of Chad in action with bandmate Flea.

So why should you choose the Vater Chad Smith’s Funk Blaster sticks?

If you want to learn more about why Vater is one of the best stick manufacturers out there, you can find out more about them in the video below.

What’s more, Chad Smith’s sticks are the least expensive on our list, yet don’t sacrifice quality.

Dave Grohl is a hero in the music industry, and his drumsticks reflect his legendary status.

The mastermind behind the kit for Nirvana (with occasional appearances as the drummer in the Foo Fighters), these sticks are some of the longest and heaviest that Zildjian makes.

While they aren’t the most durable sticks on our list (while no stick is immune from quick breakages, it does occasionally happen), anyone who’s ever heard Dave Grohl play will know how hard he hits, so this should not be a problem most of the time.

The reason that these sticks have made the list is they make a nice compromise between a  standard 5B and the chunkier options like Chad Smith’s Funk Blaster sticks.

So what should you know about the Dave Grohl Artist Series sticks?

5A drumsticks are lighter than 5B drumsticks, which makes them easier to move around the kit and less tiring to use. However, traditionally, this has meant that you sacrifice power in return.

If you’ve found 5Bs a bit of a handful in the past, you can now increase your power whilst still keeping the lighter feel of a 5A.

The first minute of the video below explains how these Extreme 5A sticks differ from regular 5As, and how that will impact your drumming.

The advantages of the American Classic Extreme 5A sticks include:

The final stick on our top rock drumsticks list is endorsed by Neil Peart, a drumming master who you’ll regularly find in the top 10 lists of the world’s greatest drummers.

But it’s not just the endorsement of such an accomplished drummer that makes these sticks so impressive.

Shira kashi white oak is a super tough, super dense wood that creates a huge amount of power, strength and durability, even in a smaller stick size.

This stick is heavier than hickory sticks so you don’t get the lightness of something like the Extreme 5A, but in return, you can rock out even harder.

So why should you choose this drumstick?

All the rock drumsticks mentioned in this article are excellent (and of course there are many other great choices out there), and all will likely serve you well on your drumming journey.

Put simply, buying great quality drumsticks gives you the best chance of finding a stick that feels like it was made for you.

Whether you end up with a 5A or 5B, oval, acorn or teardrop tip is not the most important point.

All the best drumsticks give us the freedom to play to the best of our ability, in a way that feels comfortable to us.

Most importantly, they make our drumming even greater fun than it was before.

If you can find a stick that makes you and your music feel great, be safe in the knowledge that you’ve made an excellent choice.